And the 2017 Roparunner Cities are…

On Friday 6 October, Roparun organised its annual Causes Evening in Hall 4.1 in Rotterdam. A number of Roparun’s causes were spotlighted on this festive evening. The 2017 Roparunner Cities were also announced, After Roparun 2017 the participating teams could distribute points among the municipalities that they felt had organised the most entertaining arrival festivities.

An exciting evening for the invited municipalities and arrival committees; they could be called on to take the stage as a 2017 Roparunner City. But during the dinner a number of people were already served a very remarkable dish. When the cover was lifted, a nice cheque for third prize appeared right under the noses of the Mayor of Oud-Beijerland and the chair of the Ede arrival committee.
Later in the evening there was a ceremony for the second-place winners: Ossendrecht took second place on the French route, and Almelo took it on the German route. After dessert the closing thanks of the presenter followed, and the guests looked at each other with some puzzlement: “When is first place being announced?” Fortunately the blue Roparun Bird ran into the hall with two golden envelopes to save the day. Zele in Belgium took first prize as Roparunner City 2017 on the French route; Zutphen received first prize for the German route!
A sum of money is linked to the election of a Roparunner City. The winning municipality receives 50,000 euros to devote to local initiatives that fall within the Roparun objectives of support for palliative care for people with cancer. Number two receives 25,000 euros, and number three, 12,500 euros. 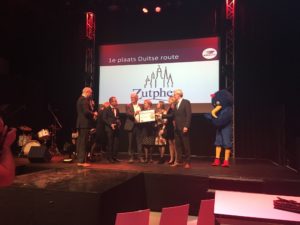 Special thanks went to the arrival committee of Bergen op Zoom on this evening. Every year they have worked to lay on a party for the passing participants. Unfortunately, for 2018 this will no longer be possible, and the volunteer committee organising the annual party will be dissolved. Naturally they deserve appreciation for the years of commitment!
Yet another arrival committee was highlighted. That of the French village Bertry. There are not many arrival parties in the French countryside, but when the participants make their way through the village of Bertry early on Sunday morning there is a big party. Mr Olivier, Mayor of Bertry, and Alan Affiance, captain of team 59 from Bertry and together with his family the organiser of the arrival party, received a gift: a roadsign that can be placed at the entrance to the village, ‘Bertry: Roparun City’.

The evening had surprises in store not only for the municipalities and arrival committees. A number of causes were also surprised on this evening with a fine donation from Roparun Foundation. First, National AYA Foundation received a cheque for 3000 euros to organise a ‘Crazy88 Weekend’ for young adults with cancer. Amsterdam Ambulance Wish could also take the stage to receive a cheque. The cheque was for 116,000 euros, for an ambulance to fulfil final wishes. Later in the evening it was announced that a cause from Belgium would also be put in the spotlight: CODA vzw from Wuustwezel. They received an allocation of 355,000 euros! They are going to devote this fine amount to equipping their renovated day centre and walk-in centre.

The press release on the Roparunner City vote can be downloaded here.

Photos taken by our photographer on this evening can be found on our photo website fotos.roparun.nl!